Your Guide to the Health Benefits of CBG

Cannabigerol (CBG) is one of the 100+ cannabinoids found in cannabis and hemp plants. The most well-known cannabinoids are tetrahydrocannabinol (THC) and cannabidiol (CBD), but there’s growing interest in the potential benefits of CBG, which has only recently become available in significant potencies. While a quick internet search reveals a plethora of information, it’s important to keep in mind that much you read about CBG is based on cell and animal studies with unknown implications for human use. After a thorough review of the literature, here’s what I think you need to know to be a smart cannabinoid consumer and decide if a trial of CBG is right for you. 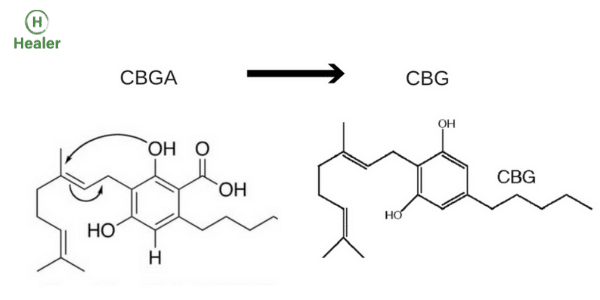 What is CBG and How is it Different from Other Cannabinoids?

Some have referred to CBG as the ‘mother of cannabinoids’, because its raw, unheated form, cannabigerolic acid (CBGA), is the precursor cannabinoid that is later converted into THCA, CBDA, or CBCA.

Like the other cannabinoids, CBGA is decarboxylated into CBG by heat and time, but few cannabis varieties have any significant amount of CBGA in the mature flowers. In the past, some growers used early harvesting techniques to increase the yield of CBGA from common medical varieties. More recently, breeders have developed varieties of cannabis that lack the enzymes responsible for converting CBGA into the other cannabinoids, resulting in fully mature flowers dominant in CBGA and low in THC and other cannabinoids. These flowers can be extracted to produce products with high levels of CBG that offer distinct medicinal benefits.

Like the other cannabinoids, CBG has the potential to help with a wide range of health concerns, including:

Who Should Try CBG?

Cannabigerol (CBG) shares some overlapping features with THC, CBD, and CBDA. Like CBD and CBDA, CBG is non-impairing and can help relieve both physical and mental symptoms. Several of CBG’s ways of interacting with the body, however, are very distinct from CBD and CBDA [1]. These properties might make it especially useful for those who have not been satisfied with the effects of CBD or CBDA:

CBG does have some similarities with its siblings THC and CBD. For example, CBG has potential to improve metabolism and reduce inflammation because, similar to CBD and THC, it stimulates the PPAR𝛾 nuclear receptor, a target that controls the expression of genes that control metabolism and inflammation. Though several cannabinoids are active at the PPAR𝛾 nuclear receptor, CBG is more potent that THC or CBD.

CBD and CBG are very comparable in their activity at six ion channels (TRPA1, TRPV1, TRPV2. TRPV3, TRPV4, and TRPM8) which likely account for some of their similarities in treating pain, inflammation, and other conditions. These ion channels are responsible for some sensations with which many people are familiar – for example, TRPV1 is the target of capsaicin, the active constituent of chili pepper, and TRPM8 is the target of menthol. Beyond creating a unique sensation, both capsaicin and menthol have been shown to reduce pain and inflammation and are commonly used for these purposes. It is likely that these ion channels also account for some of the therapeutic activity of both CBD and CBG.

CBG has also been shown to relieve pain, to reduce redness associated with inflammation, and to inhibit lipoxygenases, enzymes that produce inflammatory molecules; THC also shares these same properties, but CBG has been shown to be more potent [2].

While human research on CBG is limited, preclinical studies show promise in improving inflammatory bowel disease, other inflammatory conditions, glaucoma, mood disorders, and nerve pain.  As mentioned above, CBG has been shown to be an impressive broad-spectrum antibiotic with an ability to fight antibiotic-resistant superbugs like MRSA.

In one rodent study of peripheral inflammatory pain, CBG was shown to be much more potent than THC and aspirin [3]. CBG was effective at 1.26 mg/kg; aspirin reduced pain at 15 mg/kg, and THC worked at 25 mg/kg. While THC’s maximal pain reduction was better (THC had the potential for stronger relief at much higher doses), this data suggests CBG could be a cost-effective agent for pain, effective at low doses without the impairment possibility related to THC.

One mouse model of ulcerative colitis found that CBG was protective and curative based on the overall reduction of the ratio between colon weight to length, a measure of disease severity [4]. This model of colitis is known to increase several inflammatory cytokines and decrease anti-inflammatory IL-10 levels, and CBG was shown to restore these to normal levels in the study. Through another method of action, CBG provided antioxidant protection of the cells in the intestines. Based on these early findings, there could be a lot of promise for CBG helping with inflammatory bowel disease.

Repetitive administration of CBG, and to a lesser extent, single doses reduced eye pressure in cats. The intraocular pressure (IOP) of CBG-treated eyes was 4-8 mmHg lower than the untreated eye on the other side. That’s a significant reduction that could be important in the treatment for glaucoma. Also, CBG was shown not to be toxic to the eye or optic nerve [5]. This is especially important for patients with glaucoma who want to use a hemp product, because CBD has the potential to raise IOP, something that should be avoided – for those with this condition, CBG, THC, and CBDA are better choices than CBD.

Is it good to mix CBG with CBD and CBDA?:

CBG Dosage Guide – How to Use CBG Effectively

The key to getting the best outcomes with CBG is to use the right dosage that’s suited to your specific needs. Specifically, this means that to get the most out of CBG, you’ll need to figure out what your specific ideal dose is and how often you should take it.

I recommend starting with CBG drops administered sublingually (beneath the tongue). Some of the medicine will be absorbed quickly into your circulation through the network of capillaries in your mouth, providing rapid relief, while the remainder will be digested and provide a delayed impact.

Furthermore, consuming CBG in this manner allows you the fine tuning required to determine your unique ideal usage amount. This is especially true with Healer brand drops which are formulated to contain about 1 mg of cannabinoids per drop. As a result, drops are far and away the most cost-effective option.

Taking CBG drops such as Healer’s 6:1 CBG:CBGA with food containing some healthy fat will increase absorption, which can increase the treatment’s effectiveness while lowering its cost.

I recommend most people start with 5mg twice daily and gradually work up to 40mg per dose if needed. Most people report noticing the effects quickly (even after a single dose) and also describe increasing benefits over the first 30 days of consistent use. CBG has a mild, pleasant flavor, quite different from the peppery taste of CBDA.

Check Out Our CBG Webinar

Dr. Dustin Sulak and Bonni Goldstein MD present the current research on CBG and answer live questions on various topics. This is a recording of the live webinar that took place on November 17, 2021.

If you enjoyed this recording and are interested in watching more, enroll in the Healer Certified Training program for access to 35+ recordings with time codes and research abstracts.  Learn more and enroll