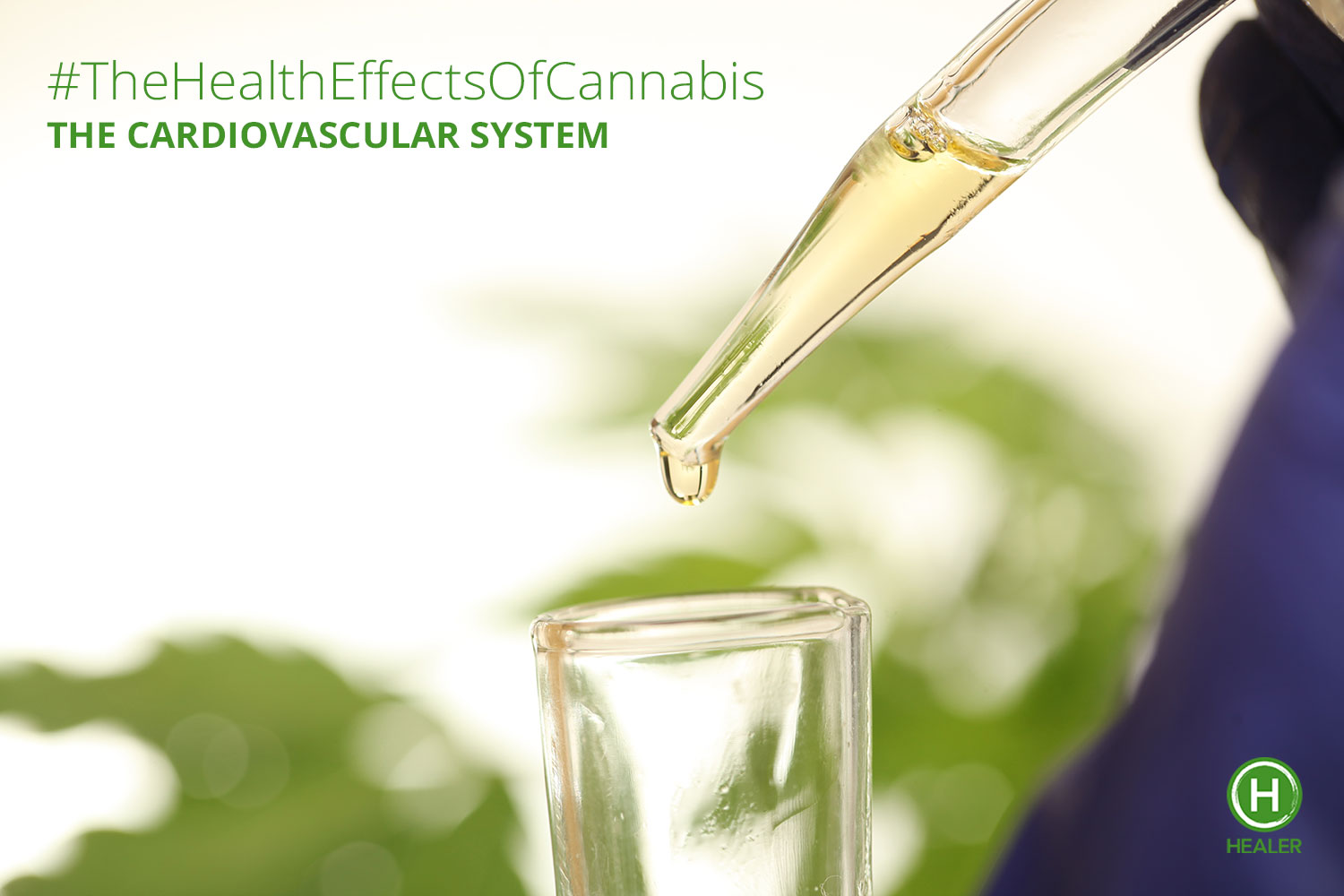 Cannabis exerts bidirectional effects on the cardiovascular system – it can increase or decrease both heart rate and blood pressure.  Typical doses of cannabis slightly decrease blood pressure and increase heart rate.  Cannabinoids can dilate blood vessels, improving blood flow, and animal studies suggest that some cannabinoids could prevent or reduce atherosclerosis (hardening of the arteries).  Ultra-low doses of THC have been shown to limit the damage of heart attack while preserving cardiac function and promoting faster healing.

In general, therapeutic doses of cannabis have a cardioprotective effect, while very high doses of cannabis and synthetic cannabinoids could be dangerous to the heart, especially in patients with pre-existing heart conditions.

In the last decades, the cannabinoid system (comprising synthetic and endogenous cannabinoid agonists and antagonists, their receptors and degrading enzymes) has been shown to induce potent immunomodulatory activities in atherogenesis and acute ischemic complications. Different from the other cannabinoid receptors in which controversial results are reported, the selective activation of the cannabinoid receptor type 2 (CB2) has been shown to play antiinflammatory and protective actions within atherosclerotic vessels and downstream ischemic peripheral organs. CB2 is a transmembrane receptor that triggers protective intracellular pathways in cardiac, immune and vascular cells in both human and animal models of atherosclerosis. Considering basic research data, medications activating CB2 function in the circulation or peripheral target organs might be a promising approach against atherogenesis. This review updates evidence from preclinical studies on different CB2-triggered pathways in atherosclerosis and acute ischemic events.

Tetrahydrocannabinol (THC), the major psychoactive component of marijuana, is a cannabinoid agonist that exerts its effects by activating at least two specific receptors (CB1 and CB2) that belong to the seven transmembrane G-protein coupled receptor (GPCR) family. Both CB1 and CB2 mRNA and proteins are present in the heart. THC treatment was beneficial against hypoxia in neonatal cardiomyocytes in vitro. We also observed a neuroprotective effect of an ultra low dose of THC when applied to mice before brain insults. The present study was aimed to test and characterize the cardioprotective effects of a very low dose (0.002mg/kg) of THC which is 3-4 orders of magnitude lower than the conventional doses, administered before myocardial infarction in mice in vivo. Three regimens of THC administration were tested: single THC application 2h or 48h before the induction of infarct, or 3 weeks continuous treatment before MI. All protocols of THC administration were found to be beneficial. In the case of THC treatment 2h before MI, fractional shortening was elevated (37±4% vs. 42±1%, p<0.04), troponin T leakage to the blood was reduced (14±3ng/ml vs. 10±4ng/ml, p<0.008), infarct size decreased (29±4% vs. 23±4%, p<0.02), and the accumulation of neutrophils to the infarct area declined (36±10cells/field vs. 19±4cells/field, p<0.007) in THC- compared to vehicle-pretreated mice, 24h after MI. ERK1/2 phosphorylation following infarct was also inhibited by pre-treatment with THC (p<0.01).

A single ultra low dose of THC before ischemia is a safe and effective treatment that reduces myocardial ischemic damage.

‘Cardiovascular effects of marijuana and synthetic cannabinoids: the good, the bad, and the ugly’

Dysregulation of the endogenous lipid mediators endocannabinoids and their G-protein-coupled cannabinoid receptors 1 and 2 (CB1R and CB2R) has been implicated in a variety of cardiovascular pathologies. Activation of CB1R facilitates the development of cardiometabolic disease, whereas activation of CB2R (expressed primarily in immune cells) exerts anti-inflammatory effects. The psychoactive constituent of marijuana, Δ9-tetrahydrocannabinol (THC), is an agonist of both CB1R and CB2R, and exerts its psychoactive and adverse cardiovascular effects through the activation of CB1R in the central nervous and cardiovascular systems. The past decade has seen a nearly tenfold increase in the THC content of marijuana as well as the increased availability of highly potent synthetic cannabinoids for recreational use. These changes have been accompanied by the emergence of serious adverse cardiovascular events, including myocardial infarction, cardiomyopathy, arrhythmias, stroke, and cardiac arrest. In this Review, we summarize the role of the endocannabinoid system in cardiovascular disease, and critically discuss the cardiovascular consequences of marijuana and synthetic cannabinoid use. With the legalization of marijuana for medicinal purposes and/or recreational use in many countries, physicians should be alert to the possibility that the use of marijuana or its potent synthetic analogues might be the underlying cause of severe cardiovascular events and pathologies.

Cannabis has been employed medicinally and recreationally for thousands of years,1,2 but it was not until the 1960s that the structure and pharmacology of its primary phytocannabinoid components, cannabidiol (CBD)3 and tetrahydrocannabinol (THC)4 were identified, and another generation before the nature and function of the endocannabinoid system (ECS) were elucidated (see reference 5 for a comprehensive review). The ECS consists of endogenous cannabinoids, anandamide (AEA) and 2-arachidonoylglycerol (2-AG), their biosynthetic and catabolic enzymes, and their receptors: CB1, which is psychoactive, analgesic, neuromodulatory and the most abundant G-protein coupled receptor in the brain, and CB2, which is non-psychoactive, immunomodulatory and anti-inflammatory. The ECS may be thought of as a grand homeostatic regulator of chordate physiological functions, whose roles have been summarised as: “relax, eat, sleep, forget and protect”.6 Those actions closely describe the effects of THC and AEA, which are both weak partial agonists at CB1 and CB2. 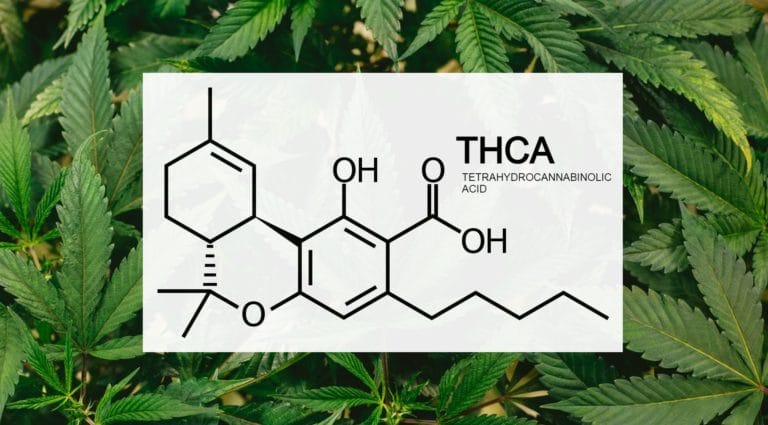 What is THCA? Understanding Benefits & Effects

Did you know that consuming raw cannabis does not cause euphoria or intoxication? People are even more surprised to learn that the cannabis plant does not directly produce THC (delta-9-tetrahydrocannabinol),...