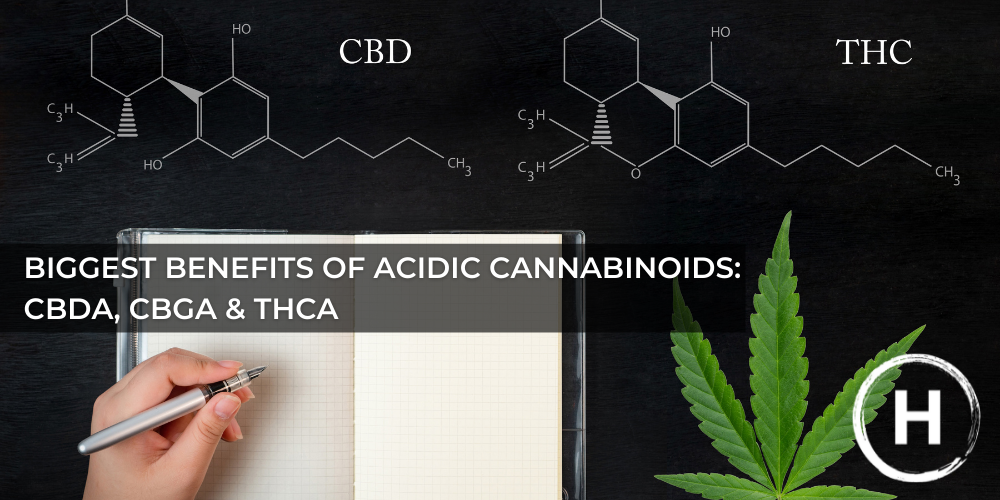 Most people don’t know that the phytocannabinoids in cannabis and hemp come in two forms: acidic (such as CBDA and THCA) and neutral (CBD, THC). While neutral cannabinoids have gotten a lot of attention, new studies show that cannabinoids in their original acidic form have tremendous healing properties that act in tandem with and in contrast to their neutral counterparts.

In this article, I share what we know about acidic cannabinoids today and why you should incorporate them. Here’s what I’d like you to know:

What are Acidic Cannabinoids?

Most people are surprised to learn that cannabis and hemp plants do not directly produce the well-known cannabinoids tetrahydrocannabinol (THC) and cannabidiol (CBD), or any of the hundreds of others researchers have identified.

The original, raw forms of cannabinoids that plants produce are called acidic cannabinoids such as THCA and CBDA (The “A” stands for “acid”). Acidic cannabinoids have a time-limited presence, however, as they slowly convert to their better known, more stable “neutral” counterparts at room temperature, or more rapidly when exposed to high temperatures, in a process known as decarboxylation.

Both acidic and neutral forms of cannabinoids can provide therapeutic benefits to animals and people through their effects on the endocannabinoid system (ECS) and other targets in the body. The acidic cannabinoids are non-intoxicating, have some distinct effects compared to teir neutral counterparts, and work well together to increase effectiveness based on synergistic actions known as the “entourage effect”.

Major and minor cannabinoids and the ‘Entourage Effect’

The concept of the entourage effect was introduced in 1998 by Israeli scientists Shimon Ben-Shabat and Raphael Mechoulam to describe the actions of our body’s own cannabinoids, (endocannabinoids) which work with each other to balance our physiology. Interestingly, the phytocannabinoids (from the cannabis plant) similarly work together to enhance each other’s benefits and decrease side effects. In almost every study evaluating the entourage effects of cannabis, it’s been shown that multi-component compounds (like whole plant extracts) work better together than isolated or synthetic cannabinoids.

The top three acidic cannabinoids we know the most about right now are THCA, CBDA, and CBGA, the natural precursors of the major cannabinoids THC, CBD, and CBG:

Delta-9-tetrahydrocannabinol (THC) is not only the most well-known cannabinoid, it’s also the most studied. THC is responsible for the psychoactive effects of cannabis, as well as many of the medicinal properties. THC has been shown to have numerous medicinal effects, including relief of pain, inflammation, spasticity, nausea, anxiety, itching, seizures, and much more.

THCA is non-impairing based on animal studies[1] and anecdotal human reports. The little research available on THCA has demonstrated anti-inflammatory properties and anti-nausea properties in mice at doses much lower than its THC counterpart[2]. Unlike THC, THCA does not appear to stimulate the CB1 or CB2 receptors either, but some of its activity may be indirectly dependent on their function.

In my clinical practice, I have been impressed by the anti-seizure properties of THCA in extraordinarily low doses, as well as its anti-nausea and anti-inflammatory properties. I’ve also found it effective in patients who are very sensitive and unable to take THC.

In many ways, CBDA works similarly to CBD, having activation at the serotonin and capsaicin receptors. CBDA, unlike CBD, has not been found to affect cannabinoid receptors, but it has been demonstrated to target the COX enzymes linked to inflammation, a process similar to that of common over-the-counter anti-inflammatory medicines.

Finally, CBDA does not lessen THC’s euphoric or impairing effects when taken together. CBDA is a wonderful option for those who use THC for recreational or spiritual purposes but still want the advantages of CBD without losing the benefits of THC.

To date, very little research has explored the effects of CBG and even less CBGA. CBG has been shown to relieve pain, reduce skin redness, and inhibit lipoxygenases, enzymes that produce inflammatory molecules, more potently than THC[10].

Evidence suggests that CBGA may have its own therapeutic uses, however, it is best known for its role in the formation of other cannabinoids. Like the other cannabinoids, CBGA can convert into CBG by heat and time. However, the plant also converts CBGA to THCA and CBDA.

The Value of the Acidic Cannabinoids

While we have yet to fully understand the full medical potential of acidic cannabinoids, early research is already showing that “acidics” have greater bioavailability, which means they get absorbed significantly better than their neutral forms. There’s also some evidence that they may even act more strongly in the body in addressing symptoms.

How to Get the Acidic Cannabinoids

Instead, eating raw cannabis preparations is an excellent method for getting acidic cannabinoids and incredibly easy to do. Small amounts of fresh raw cannabis flower (e.g. 0.25 gram) can be eaten directly (chewing for a few minutes can speed onset). While large doses can cause some digestive upset, few other side effects have been reported from raw cannabis. For your health and safety, always choose cannabis flower that is organic, and pesticide-free.

Another way to get raw cannabinoids is by brewing cannabis tea. This can be done by boiling hot water and filling up a cup and then adding flower the size of a small pea or pencil eraser to steep for 4-5 minutes. The tea will provide very little THC, so is unlikely to produce psychoactive effects, because THC has low solubility in water. If brewing THC flower, and if you add milk or cream, the THC content increases. If you want a THCA-predominant tea then do not add any fat or oil. The hot water (<212 •F) helps to extract acidic cannabinoids but will not significantly decarboxylate the acidic cannabinoids.

To get acidic cannabinoids, wide-spectrum solutions like tinctures and drops that are developed for precise dosage are ideal. Keep in mind that conventional extraction and production procedures can lose or damage CBDA and other acidic cannabinoids, so look for products that have a high CBDA content and keep them refrigerated to avoid the acidic cannabinoids converting to neutral cannabinoids at room temperature.Also look for results of third-party testing by an independent laboratory or certificates of analysis (COA) confirming the range of cannabinoids in the product including acidics and verifying that it is clean and free of contaminants such as mold, bacteria, pesticides, solvents, and heavy metals.

How Much Do I Need to Take & How Often

I often recommend patients drink a cup of cannabis tea (THCA or mixed THCA/CBDA) twice daily for two weeks before evaluating its impact on your physical and mental health.

If you have acidic cannabinoid products, start with 5-10 mg twice a day and work your way up to 20 mg if necessary. Over the first 30 days, most consumers report observing the effects and how the benefits improve. When taken as drops, CBDA has a peppery flavor that may be eliminated with a sip of water.

For acute nausea, I often recommend chewing a small pea-sized cannabis flower, then keeping it between the gum and lip without swallowing.

The acidic cannabinoids are available, safe, and powerfully therapeutic– be sure to include them in your relationship with cannabis!

Dustin Sulak, DO, one of the first physicians in Maine to incorporate the legal use of cannabis as a medicine in 2009, is the founder of Integr8 Health, a medical practice in Maine that follows over 8,000 patients using medical cannabis. Today he is globally recognized by his peers as a pioneer of clinical applications, formulations, and usage protocols.

He is co-founder of Healer, a medical cannabis brand founded to address the challenges of helping patients and health providers get the best results with safe, reliably dosable products and education on how to best use them. Healer’s distinctive product formulations and educational material are based on his work.

Healer medical cannabis products are currently available in Maine and Maryland. Healer Whole Plant Hemp CBD products are available nationwide. For more information about Healer medical cannabis products, visit www.Healercannabis.com or visit us at 110 Orion St. in Brunswick. For education on how to use cannabis as medicine or information about Healer Whole Plant Hemp CBD products, visit www.Healer.com.